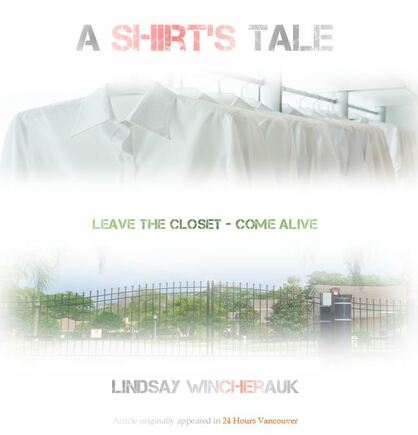 MORE M.I.A.
Imagine if you were to open your closet and you were to find nothing but White Dress Shirts.

On the surface, your closet would appear to be living in perfect harmony. Your shirts would likely consume the same fabrics, favour the same stitch patterns and adorn the same buttons.

Then one day, a shirt ventures out and discovers new fabrics and styles. Upon its return, it would speak of exciting new discoveries.

Some would discount these findings and vow to keep others out; under the guise, they are protecting their culture and way of life.

Others would become curious and begin to search online for new adventures and ways of life.

Next - a new shirt would be introduced to the closet, a shirt of colour, a different cut. Soon more shirts are introduced, patterned shirts and even a pink shirt. The closet comes alive.

Some of the shirts denounce their new neighbours.

They shout out: “This new way of life will stain our fabric. It must be washed separately.”

They do this out of fear, ignorance and hatred.

Others embrace differences and inch closer.

The loudest of the DRESS SHIRTS claim they don’t hate and try to convince others that the new shirts are taking away opportunities. They claim they are being left in the closet more often. They begin to become stiff and retreat to their own (-gated) sections of the closet where they control who is allowed in.

Groups begin to form against the new shirts. They do this under the premise of the greater good. The weaker shirts follow suit. Taunting and violence occasionally erupts.

The new shirts don’t understand the hostility. After all, they came to the closet looking for a better life, and easier life. Some escaped torture and oppression. Now they are met with the same disdain in a new land. They too retreat to their own pockets of the closet.

Some disillusioned shirts of colour strike out at the DRESS SHIRTS way of life. They too lack tolerance.

More rage ensues. The loudest of the DRESS SHIRTS pledge to retaliate. They call their attackers terrorists. They invade their lands in an attempt to stomp out evil. Some of the more ignorant shirts attack those in our closets at home.
​
As hope begins to vanish, radical groups form amongst the new shirts. The more hostility, the more recruits. They go online to organize future strikes against the oppressors.

As for my closet, it is full of colour, different styles, cuts and fabrics. I’m glad my closet is in Vancouver. It may not be perfect. It may have a way to go. However, in my estimation it is the best city in the World!