I walked past these signs offering huge savings daily. An idea began to rattle around in my head: I think there is an article here?

Gas prices: skyrocketing. Hmm, this could be a problem for the world? Apparently, we need fuel for…everything.

A news channel runs a story about the exorbitant prices.

Hey, Mary, let me slam this microphone in front of your face, and go, “These prices are ridiculous. I remember when I used to walk uphill to school thru 6-foot snow drifts, both ways, shoeless, like Joe.”

“Thanks for the clip, Mary. We’ll edit, you will sound Mensa!”

I need to fill up my fuel-efficient vehicle.

STATION 1 SIGN: Save 3.5 cents at the pump. No membership required.

STATION 2 SIGN (across the street): Save 3.5 cents at the pump. No membership required.

Why don’t you post the bleeping real price? I thought.

Are we being gouged?

A story idea is born—let’s see where it went!

What a couple of months on our home planet Earth.

Let's see: Iraq, terrorist strikes in London and Indonesia, hurricanes, soaring gas prices due to natural disasters and the looming oil crisis. Luckily, in the Lower Mainland, we save 3.5 cents per litre--no membership required. 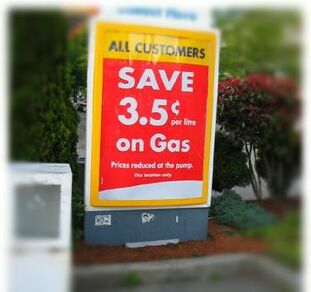 ​To top it off, before we can pick up the pieces, and our emotions for that matter, we are being told that the bird flu is going to wipe out a large portion of the world population and we may not be able to do anything to avoid it.

If the birds don't get us, crystal meth will; if not us, then our kids.

If not the birds or meth, then obesity; our girth is rapidly expanding.

As if that was not enough, our beloved and respected teachers decided to bring their issues to the forefront and put those same kids on the mean streets for a couple of weeks. Not that their issues aren't important - but, that's nice timing. After all, we're all a little emotionally bankrupt, to the point where the teachers' strike may have actually been a pleasant distraction. Well, that and who Paris Hilton is pissed at. No wonder those Desperate Housewives are so popular.

The point of my rant, unless you're lucky enough to be counting to 54 million right now, is that the world can be scary. George W. is telling us: "America is currently consuming oil at a rate where we are using 40 per cent more oil than we are capable of producing." 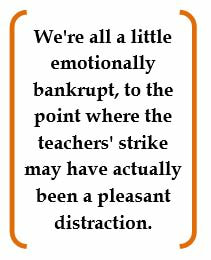 Far too much for any of us to digest and keep a level of happiness at the same time; unless, of course, you are still counting: 53 million... 53 million and 1.

Then it hit me: A solution to a couple of the problems facing the world today, at least the Western world. On a day when I was stressed to the max--working ridiculous hours and still needing to find time to run errands and eat, I pulled into a drive thru at a local fast-food joint. While idling behind nine vehicles, waiting for my sodium-enriched fix, a light went on: BAN DRIVE-THRU'S.
​
Just think about it for a moment. If we were to eliminate the drive-thru, roughly 330 million North Americans would have to get off their lazy butts and walk to their favourite burger joint for their fix. OK, maybe only from their cars. To carry it even further, we would eliminate all of those idling vehicles. Think of the oil that would save.

Radical, I know, but it's a start.

I wrote this article in 2005, “Iraq, terrorist strikes in London and Indonesia, hurricanes, soaring gas prices—”

Turn off the news - be kind to each other!
DTES: EYESORE OR OPPORTUNITY