I pull up to the corner of Broadway + Main Street, it’s 10 AM. I stop at the light. I glance right—appalled at what I see. I think about reaching for my phone to snap a photo. I don’t. I don’t want to risk the ticket.

I rectangle the block.
​
I come to the corner again. I pull over, close to the sidewalk. I lower the passenger window to snap a shot. Again, I decide not to risk the fine.

My eye(s) site isn’t fooling me. I rectangle the block once more, eventually pulling over close to the sidewalk. I jump out of my vehicle. A white Ford Escape I dubbed: Honky. I thought: Cracker would’ve been offensive. The racial slurs associated with my naming of my vehicle, have zero effect on me. I’ve never been oppressed + I’m not a Caucasian who’s ever screamed “Reverse racism.”

Having said that, I’m not ignorant enough to claim, “I don’t see colour.”
​
I snap the photo. 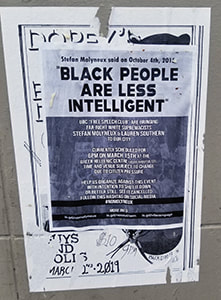 How can humanity still be here?

Sure, I know, it’s not the majority; but c’mon, this is a sign on the corner of a busy intersection, in a major international and culturally diverse, liberal city, in 2019.

Have I chosen to look at life through a rose-coloured lens?

I must channel my outrage. I debate writing. I worry sharing may be precisely what the purveyors of hate want us to do. Pushing this ridiculous, lazy, trope forward—well—it’s frankly disgusting. However, talking about it is necessary.

He’s not part of this article, okay, he is now. He’s a watermark.

Upon further inspection of the poster, I discovered it is supposedly posted by those opposed to this White Supremacist (I won’t type his name) speaking at UBC.

Why bother fighting him?

And, for bleeps sake, why would you throw these posters up around the city “advertising” he’s coming? Seriously.

His message stands for hatred, intolerance, ignorance—preached to a group of fucking disgusting lowlifes. I know that sounds harsh. But, how else would you describe them?

So, this fucker thinks if he can only rally his like-minded-low-life-non-thinkers together to express how hard they’ve been done by—by people supposedly less intelligent, then and only then, can they move forward to utopia. How fucking absurd.
​
Just imagine, the speaker spews his hate-filled vitriolic message and a light goes on for one of his followers, “That’s, um right. I’m not the dumbest one. That one, over there—is? I’ll be able to sleep better now. Life is going to be grand. Ouch, my head hurts. I’m thinking. I don’t like thinking.”

I have no desire to go to this event.

Should it be cancelled?

Hmm, free speech is important, but—I think, yes, it should be cancelled—but I also think it’s best to know who attends. I suggest setting the audience up like a wedding.

To the left: the racist pieces of garbage who need validation of their stupidity, can sit.

To the right: people who need to purge people from their lives.

I hate this event. I despise the speaker and any like-minded thinker.

I think they are ignorant, imbecilic, stupid, and not, Neil deGrasse Tyson. They are trapped in their marginality laced with generational conditioning filling their heads with fear, instead; of embracing the unlimited brilliance of the world.

I don’t feel sorry for them. They are not part of the future. I just hope they refrain from destroying those they bring into this world. They are sick. They are dinosaurs.

I feel sad for the world. WE NEED TO STOP DIVIDING EACH OTHER.

We need to stop reporting how many Canadians die in a plane crash. It’s not the Olympics, we don’t need statistics—we need compassion.

I hate that I’m a product of the noise dividing us. I’ve seen the movies. Watched the news. Listened to the politicians. And, like the rest of us, I’m not immune. I might even overcompensate to the point where when I show my disgust; my voice is loudest to those who’ve dealt with systemic racism their entire lives. I worry my disgust might be construed as racist. My caring may be self-serving.

Nah, I matured enough to realise most people on this planet are trying to get through their days with love, health and happiness.
I grew up in insular, mostly Caucasian, Saskatoon, many moons ago, and no matter how pickled me or my friends would get, we’d often call our indigenous people “drunken—” I’ll stop, I’ve evolved.

I hate that I’m profoundly sad.

Because, as much as I knew humanity is flawed and racism + hatred rage on, I’m sad because it is 2019, and this is still a thing.

​Be kind to each other + turn down the volume of the noise + when a racist shows you who he or she is, believe them the first time, and take solace in knowing: together, the rest of us: are far greater than the remaining dinosaurs of hate!

I almost forgot to answer the question: Are we this flawed?

No, the majority of are not, but having said that, it is imperative for those of us who are not; to drown out the noise of hate with kindness. ​

I took the first paragraph of this OPED from my thoughts on the movie Green Book. I think they ring loudly here.
kissa tanto