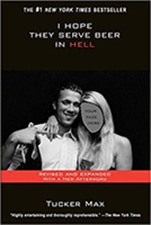 I HOPE THEY SERVE BEER IN HELL

1 STAR (really it's a negative number)

This book was lying around the office at work. I liked the title. I thought it would be a light read. I also thought a co-worker said it was funny.

I read the book. Tucker Max is a dick. He’s proud of being a dick. He spends almost 300 pages trying to convince readers he’ a dick.

The book consists of 27 of the exact same stories. Hunter gets drunk. Hunter treats everyone like crap. Well, not his friends, they are simply props in his stories...actually, he treats them like crap because he paints them as the lowest of the low, losers who use, losers who are not as cool as he is, losers...PERIOD.

My IQ dropped several points because I read the whole fucking book waiting for him to pivot — he didn’t — it actually ends worse than it began.

I’m certain, he has an audience. I’m sure, he panders to that audience. Because, if he doesn’t, and this is who he really is...I feel sorry for him, actually, if this is all an act for him to make money — a portion of  America is really sick.

Almost 300 pages of what is supposed to be side-splittingly funny and I didn’t laugh once. The only smile I almost cracked was when he mentioned the Comic Book Guy from the Simpson’s

Almost 300 pages and I waited for him share something that would make him likeable, and:

​
How could anyone stop laughing?

We are supposed to believe him. Because he says so.

I don’t care. I personally find boasting about prowess and conquests stupid. I checked his website: if people question him, he insults them calling them losers — I wonder if he has a mirror at home?

I repeat: I don’t care about whether his stories are true or not.

I didn’t pay for this book. I could’ve stopped reading. I didn’t. That’s my own stupidity.

I would even go as far to say if I had a list for the people (living or dead) I’d least like to go to lunch, have a drink with; or go golfing with: TUCKER, for the time being, would be #1.

I am giving the book a 1 STAR because they don’t have a negative for an option. The only reason I’m being that generous is in one paragraph he talks about how fucked up his childhood was.

By the time I finished, I considered never reading again, until...

...when I got home, after finishing, I spread Tuna on my keyboard, and let my cat have a-go-at it for an hour. I printed what she wrote. I read my cats scratching: 3 STARS — and she’s a bleeping cat. She also seems to be more human than Tucker.

Oh yeah, the friend I thought recommended the book, he told me he was getting rid of it — he hated it. He read it ten years ago. He just so happens to be a guy who grosses me out all of the time. I wish he would have thrown it out.

Anyway, that’s all for now... one last thought... tell them how the book made you really feel?

Okay, here goes, “sad,” I feel sad for Tucker.
​
I don’t think he’ll understand, or care, after all: he spent almost 300-pages trying to convince readers that he’s the coolest, most desirable, funniest... asshole, who’s ever lived.
OCCURRED: May 25th
WRITTEN: One-hour later my cat wrote a better book.
POSTSCRIPT: I don't usually share my thoughts on things I think suck - this book sucks sooo much: I changed my policy.