REVIEW OF A REVIEW 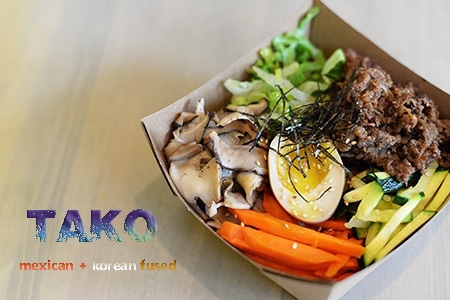 CLICK ON IMAGES TO GO TO TAKO
MEXICAN + KOREAN
$2.95 per taco - $10
7.11
The WESTENDER was my go-to weekly for a snapshot of city life. Dining gems were often found in the Restaurant Section; reviews fair, never mean-spirited.

Why would they be?

Her words felt more like those of an internet troll than food aficionado.

She was so traumatized by her chicken taco, suggesting: "the chicken seized in fright"... because I think they knew Anya was about to judge them.
​
She called the Kimchi, "a science experiment;" a burrito, "considerably less offensive;" and, she "took one for the team" by trying poutine.
What bloody team was she talking about?

I took one for the team by reading her review. It reeked of cattiness; it was considerably offensive.

Who was she writing it for?

Tako is a one-of, not a FAST-FOOD GIANT. Unlike the giants unfavourable reviews can...

Maybe cattiness was the wrong word?

I’ve been to Tako with my friend, J. Lee (Korean). We thoroughly enjoyed it!

Try Tako!
​
If you don’t like Tako, you can walk across the lane and line-up to fine-dine at the Mom & Pop, Costco: “Food” Counter.

MY ORIGINAL REVIEW OF THE REVIEW WAS 8X LONGER
I SENT IT TO ANYA + THE EDITOR
I WAS ASKED TO SUBMIT A SHORTER VERSION
I LIKED THE LONGER VERSION MORE!

Firstly, I am so glad to hear that you and your friend enjoyed our food:)

Also, I read the review from Anya that was on Westender last week. The review was quite critical and negative. I could not believe she felt like that.

Now I read all your review on your blog prudently, and really appriciate to you about writing a honest review!

Thanks for your interest in our restaurant,
​
I hope see you again at TAKO!